Many people do not have a problem with pirating paid content, like downloading movies, music, software or books. Why is that?

I am not trying to start a debate on whether piracy is theft or whether intellecutal property is a real thing worth protecting. I am focusing on the moral intuitions of people who download stuff, and why they don’t feel too bad about it.

I can think of a couple of reasons.

Downloading a copy does not destroy the original one. A somewhat obvious point, but if I take your iPhone, you don’t have it any more. If I make a copy of your movie, you still have your original. Copying does hurt the owner, because it can be argued that less people would be willing to pay for the movie if it can be copied for free, but the damage is still partial. If I take your iPhone, I take 100% of it. If download a copy of your movie and 99 other people do pay for it, then I “take” just 1% of the movie from you, in a sense. Which brings me to the more interest point.

The Potential for Revenue

The amount of money people make from selling copies of things is not a normally distributed variable. 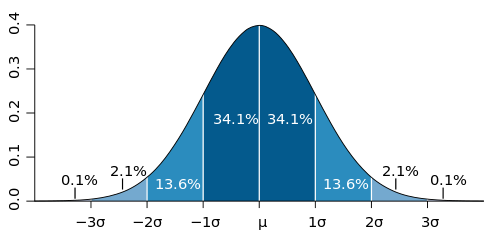 Some things are normally distributed, like people’s height. Lots of people are in the middle of the curve, meaning roughly of average height. Fewer people are actually twice as tall as other people. No person is ever 100x taller than another person. Other things do not distribute normally, like people’s income. Some people do earn 1,000,000x more than others. Income is distributed according to a power law, and not according a normal Gaussian distribution.

For example, copying a music album by a strugling musician, for whom the income from each copy is quite significant, is something that many downloaders would feel bad about. On ther other hand, copying music by a billionair rockstar is something that’s easier to feel okay about. (I’m not justying, just describing how I believe people feel).

It also has to do with the price of content. If a struggling musician demands $10,000 for each copy of his album, suddenly copying his stuff doesn’t seem that bad, because his price seems outrageous. Similarly, if I am poor and cannot afford to pay for music or movies, then I also don’t feel so bad about copying it, even if the price is reasonable. Let others who aren’t as poor as me pay. Perceived price fairness is relative to how much money the buyer and the seller have.

The problem with the way content is sold today is that the price is pretty much fixed. J.K. Rowling earns just as much for the first copy of Harry Potter as for the 400 millionth copy. Some justify this system by arguing that book publishers take on risks when publishing books, and they rely on these mega-hits to pay for all the failed ones. Again, I think I can argue against this logic, especially in a world where books are distributed digitally and the entry barrier for authors has been lowered, but that’s not the point I’m trying to make now. My point is that people feel okay about downloading a copy of Harry Potter for free because they know that Rowling already has more than enough money.

People want authors and musicians to succeed financially, but it’s not important for them that they become immensely rich. If a book’s price would fall in proportion to the number of copies sold, successful authors would still make a lot of money, they just won’t be making a million times more than the average author. Consequently, consumers would have a lot more money left to pay for more books by other authors.

This intuitive picture of how fairness has to do with a normal (or at least less extreme) distribution of wealth is a major factor that influences the pervasiveness of piracy. Designing an alternative system of pricing for content is an interesting exercise. For example, a music subscription service where people pay a fixed monthly fee. Revenue is then distributed between artist based on how many people listened to their music, but not in a strict linear proportion, but rather fitted to some moderate curve.

Today, the top seller makes about twice as much as the 2nd best seller, and so on. If people spend, say $20,000,000 on music every month, and there are 1,000 artists, then under the current system the top seller gets $10,000,000 and the worst seller gets practically nothing. Under an alternative system the top seller could get $50,000 and the worst seller $1,000. We would have hundreds of thriving artists, instead of 15 extremely rich ones. It doesn’t have to be as “flat” as this, of course. We can have it as as curvy as we’d like. But even under this example, earning $50,000 a month is a lot of money. Enough money to keep playing music.

So that’s just one model, and I think it can actually be feasible, in a world dominated by streaming services and Kindle and so on. We could also have a model where content is bought individually, not using a subscription, but the price diminishes with popularity, achieving a similar curve as above.

I believe piracy is going to remain an issue even if paying for content becomes just as easy as downloading it for free, and even if average prices go down (e.g. an average Kindle book costing $5). As long as income from copied digital content is distributed exponentially, people are going to be aware of how massively rich the top performers are and thus feel okay about copying their content for free.